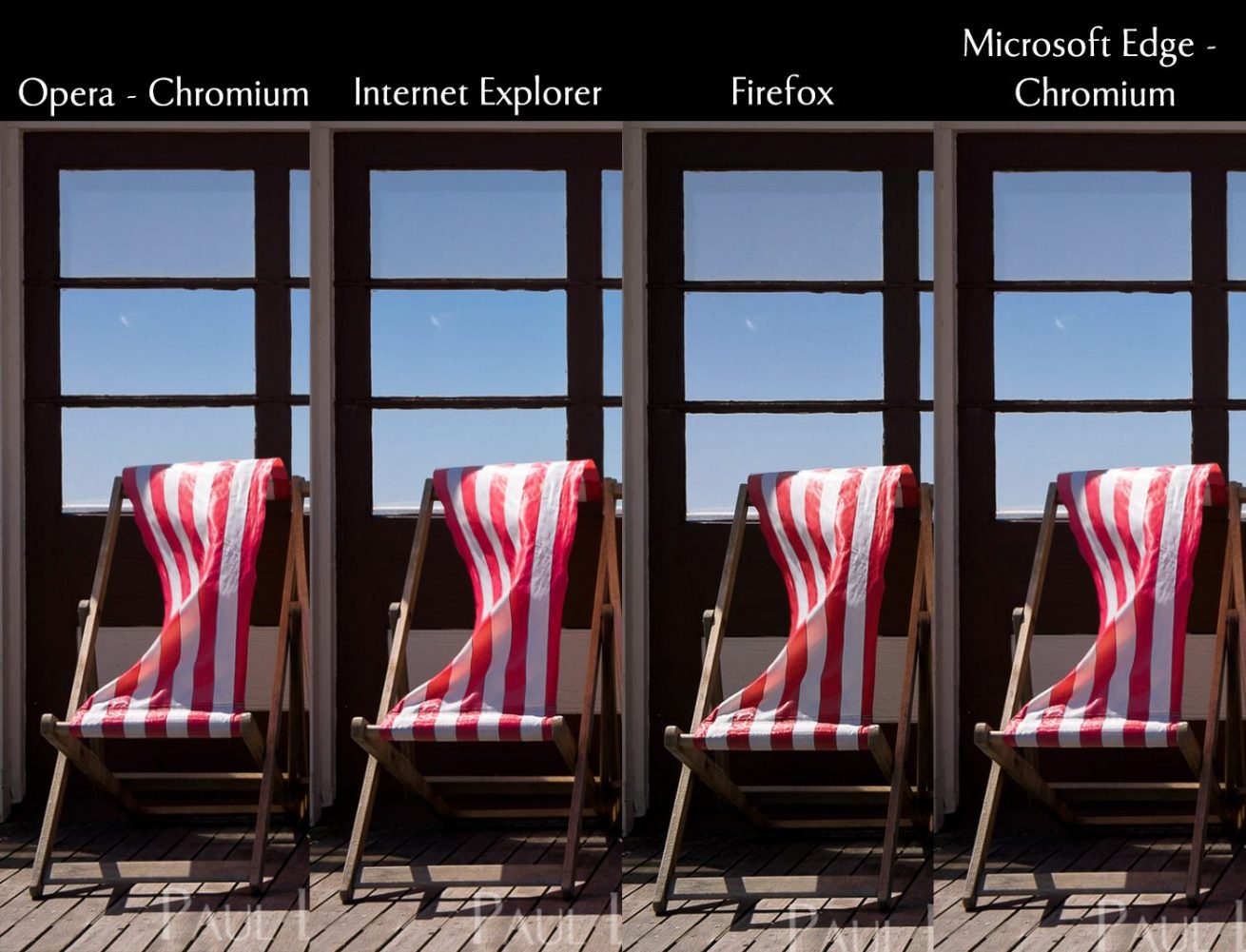 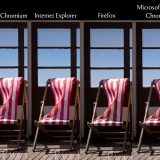 You may not be seeing the colour you think you are

In 2016 I wrote a blog about colour accuracy in web browsers out of interest in what my clients would see when they view the images I deliver to them on their websites, and what the rest of the internet world would see on their own browsers. Today I’ve returned to look at how web browsers have changed in their rendition of colours, and to see if there’s a change to my conclusion from 2016.

Colour accuracy on the internet is a pot of gold at the end of the rainbow – seemingly within reach, but in reality it’s just not there. As in 2016, my own workflow is entirely colour managed, from camera to exported image, whether that’s an RGB png or jpg image file for use on the internet, or a CMYK tiff file for printing. Colour is managed throughout the process to maintain accuracy with what I see on my own, regularly calibrated monitor. In this way I ensure that the images I deliver to my clients are as accurate as I can make them when they leave my computer.

Where it can go wrong

However rendering of colours will change depending on the configuration of the computer or mobile device that my clients and their end users have, including but not limited to:

Even with all of that, I think I can still make some conclusions about the colour accuracy of web browsers, as I’m testing them against each other on my own, calibrated system. With all of those caveats in mind, lets jump into the results seen in the image above, which I’ve repeated below to save you some scrolling. 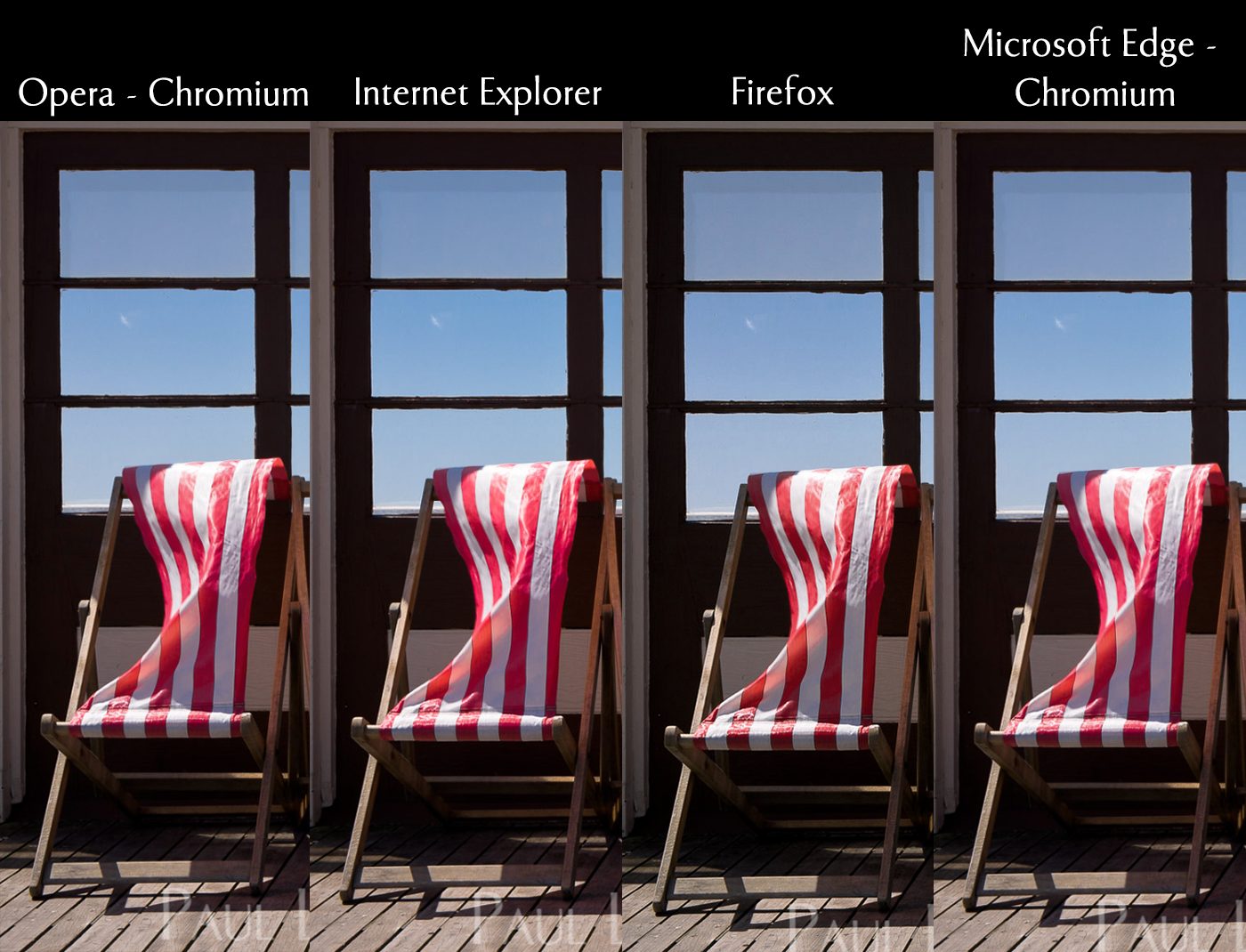 In 2016 I still had a copy of Google’s Chrome browser installed on my computer, but the dismal colour accuracy of Chrome in 2016, brought to my attention after my tests, and unrelated privacy concerns have made me uninstall it. However, Google’s Chrome browser is based on a free, open-source browser called Chromium, and many other browsers use the same code base, including Vivaldi (which I’m using to write this blog on), Opera and now Microsoft’s new Edge, two of which I tested.

In 2018 Chromium added colour management to their code base, and all browsers using that code base now have colour management. Opera performed well in the test giving results similar to Internet Explorer and, not surprisingly, Microsoft Edge. Compared side by side with the original image in Adobe Lightroom, my editor of choice, Opera’s image has a slight magenta cast, making the red stripes of the deck chair more bold than I intended, and detracting a little from the warmer yellow in the image, but it’s a vast improvement over 2016’s Chrome.

Yes, it’s still around, but really only for larger corporations who have internal requirements to use it. Its also still bundled with Windows, though not the default browser. As a matter of fact, you shouldn’t use it. Don’t use Internet Explorer unless you simply must for your work. It’s code base is ancient, creaky and rapidly becoming obsolete with changes to web standards. It’s also still a favourite vector for malware. Don’t use it.

If you have to, though, you can breath easily in that at least it’s colour accuracy is still quite good. It pretty much matches Opera and is fairly accurate, though with a similar magenta cast.

The winner of the 2016 tests, Firefox has long had configurable colour management, and in today’s test it still looks the best. It doesn’t have the slight magenta cast that Opera & Internet Explorer have, though it’s just a little unsaturated, and is a fairly widely used browser with great extensibility.

In 2016 I tested the (now old) Edge and it performed much like Internet Explorer. Today’s Microsoft Edge is based on Chromium, so it now has virtually identical colour accuracy as Opera, and other Chromium based browsers such as Google Chrome, Vivaldi, Brave and others. It too has that slight magenta cast, but isn’t too bad at all.

Its not a runaway victory for Firefox as it was in 2016, but I think its still the most accurate rendering of the image that I see on my own, colour calibrated and colour managed system.

The Chromium based browsers are all vastly improved over Google Chrome from 2016. Then Chrome had a nasty green tint across the entire image, quite simply ruining it. Today’s versions show better colour accuracy than that, but aren’t the best because of that slight magenta cast.

Internet Explorer – don’t use it.

So the 2020 winner is still Firefox, but by a much reduced margin. Tell your friends, and spread this post around so that we can all share in better colours when we browse the internet.