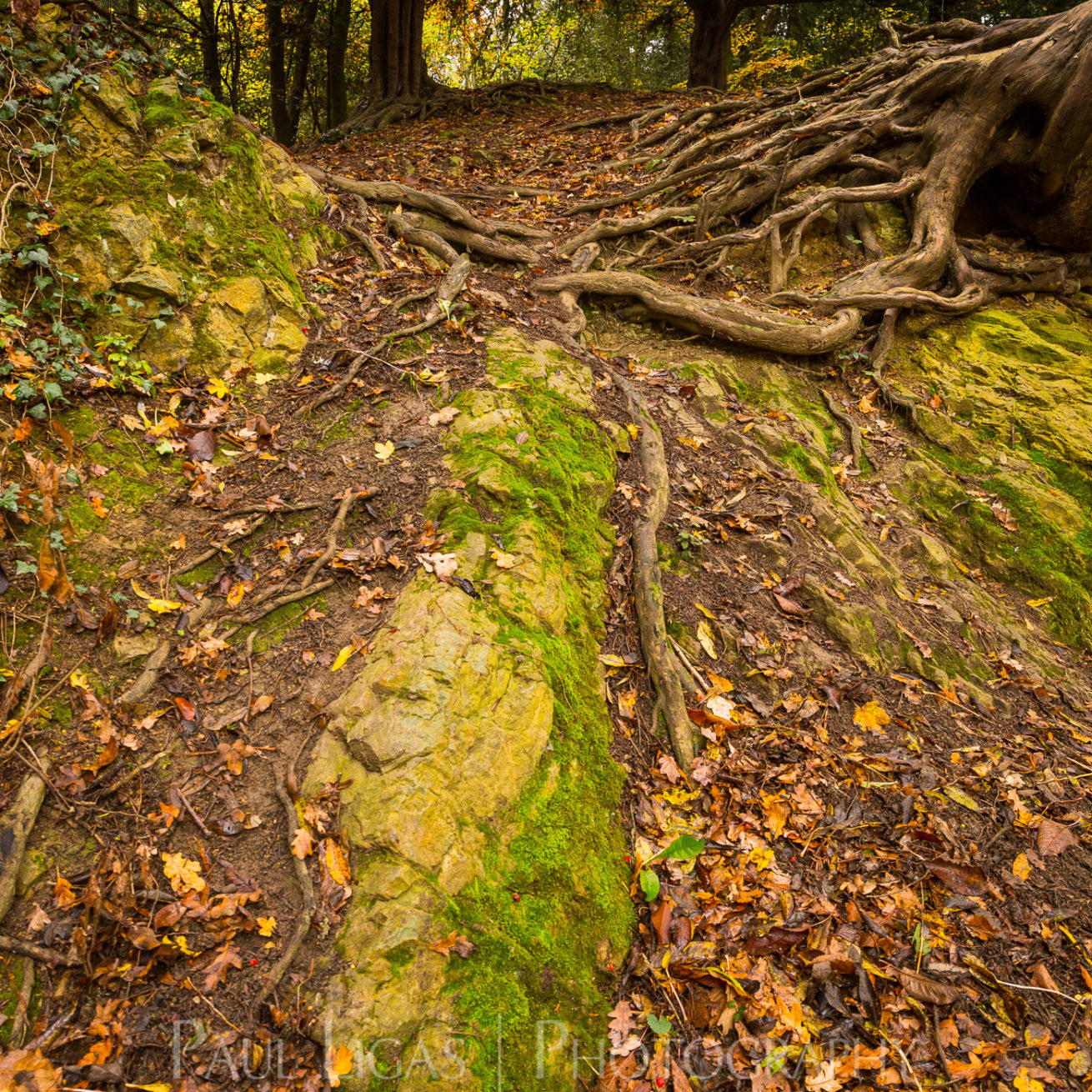 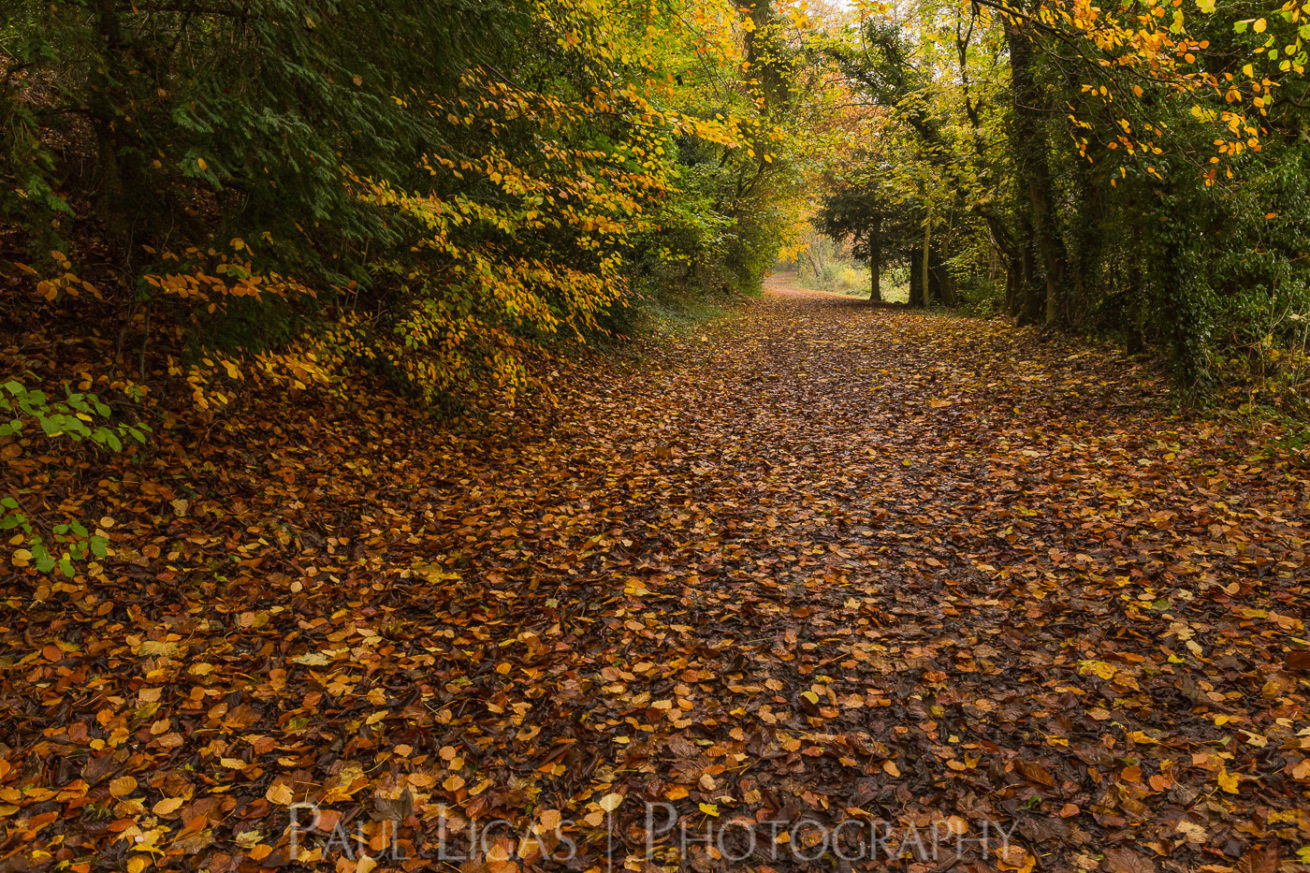 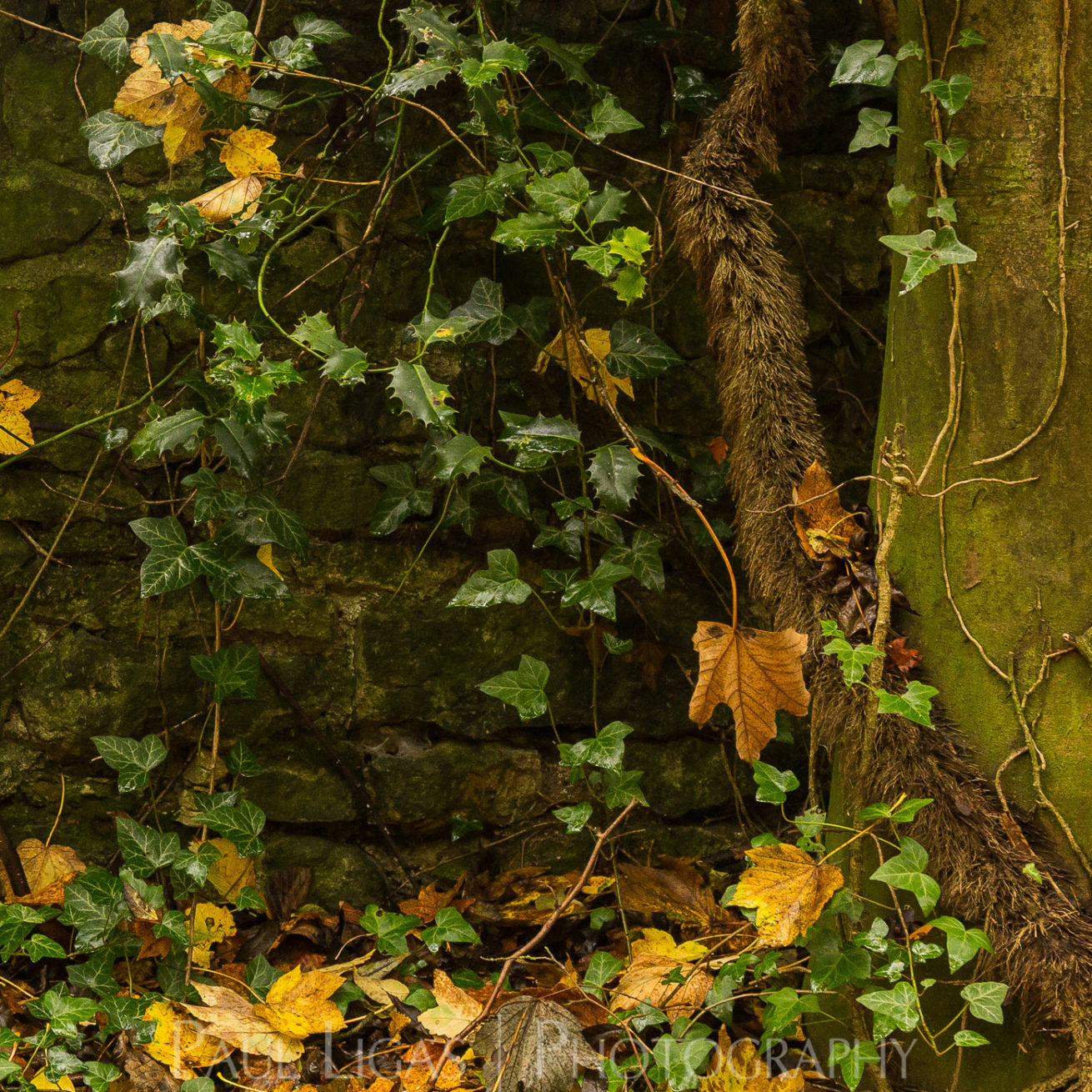 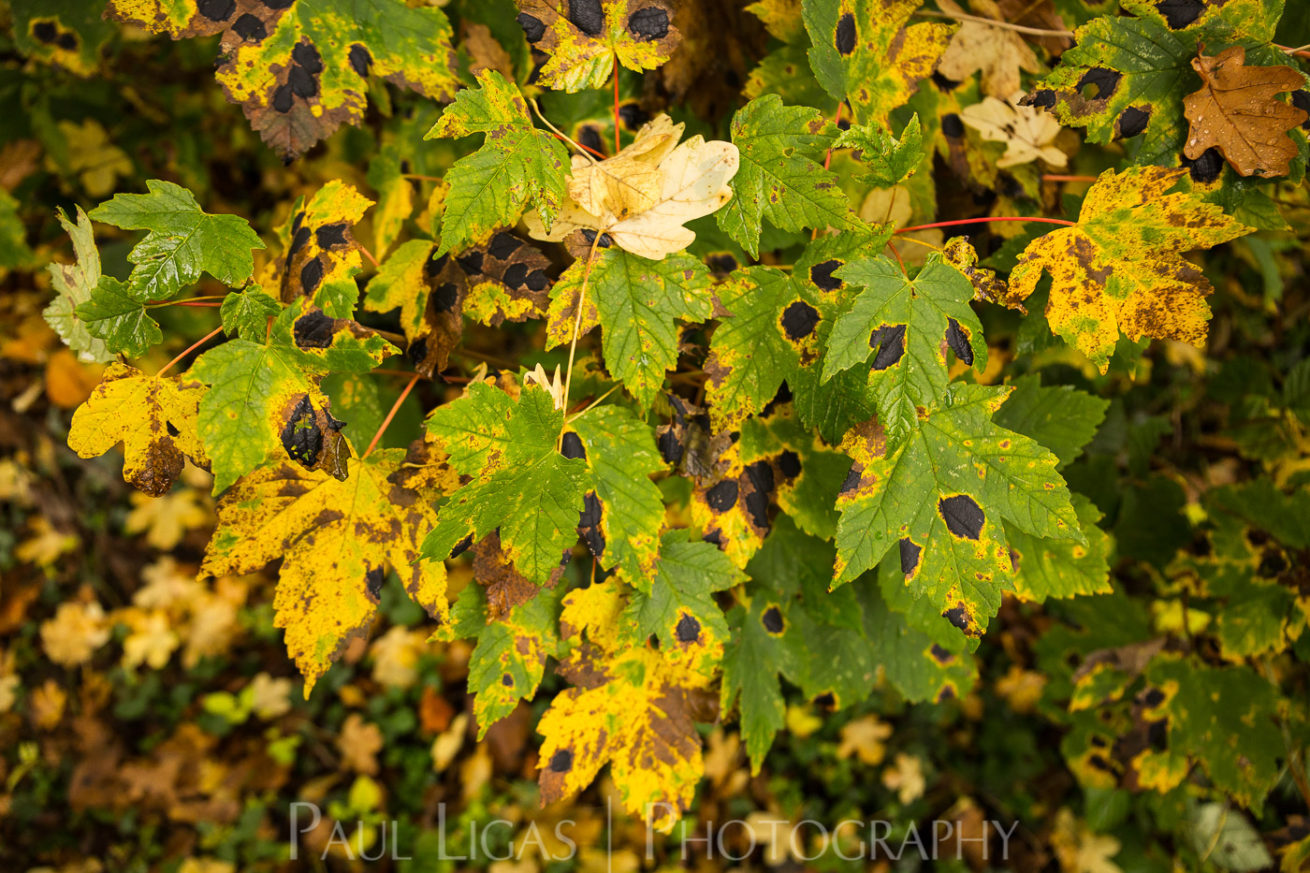 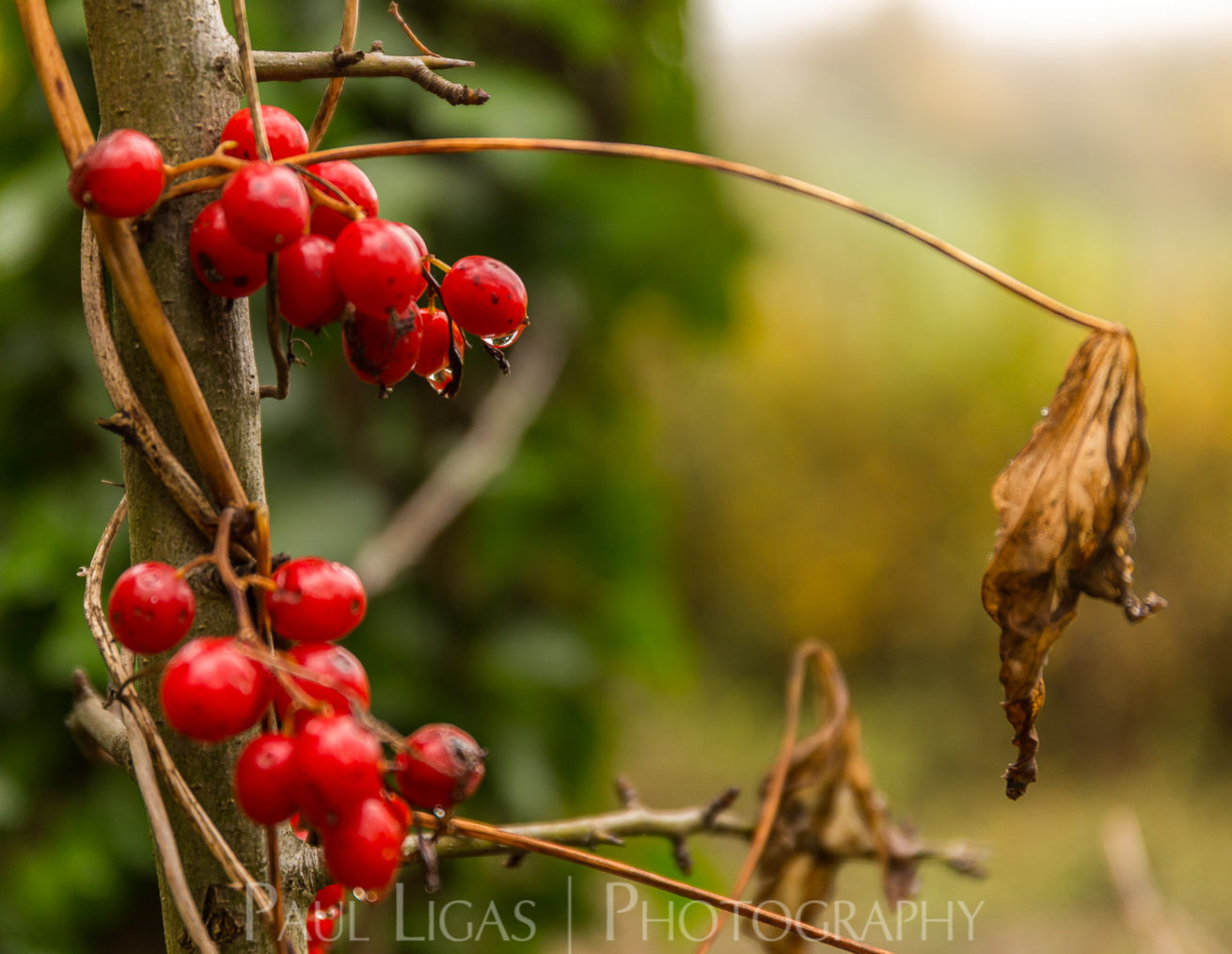 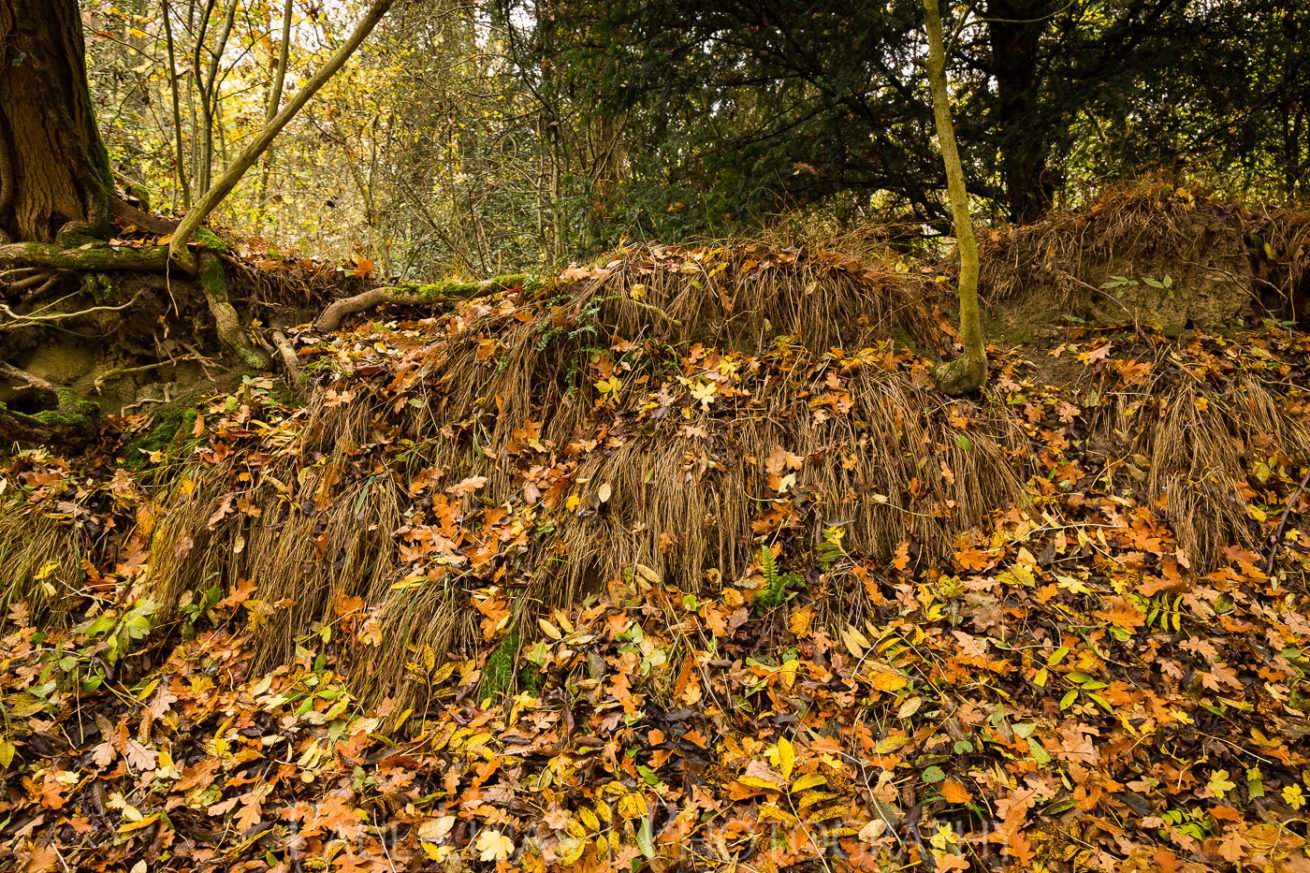 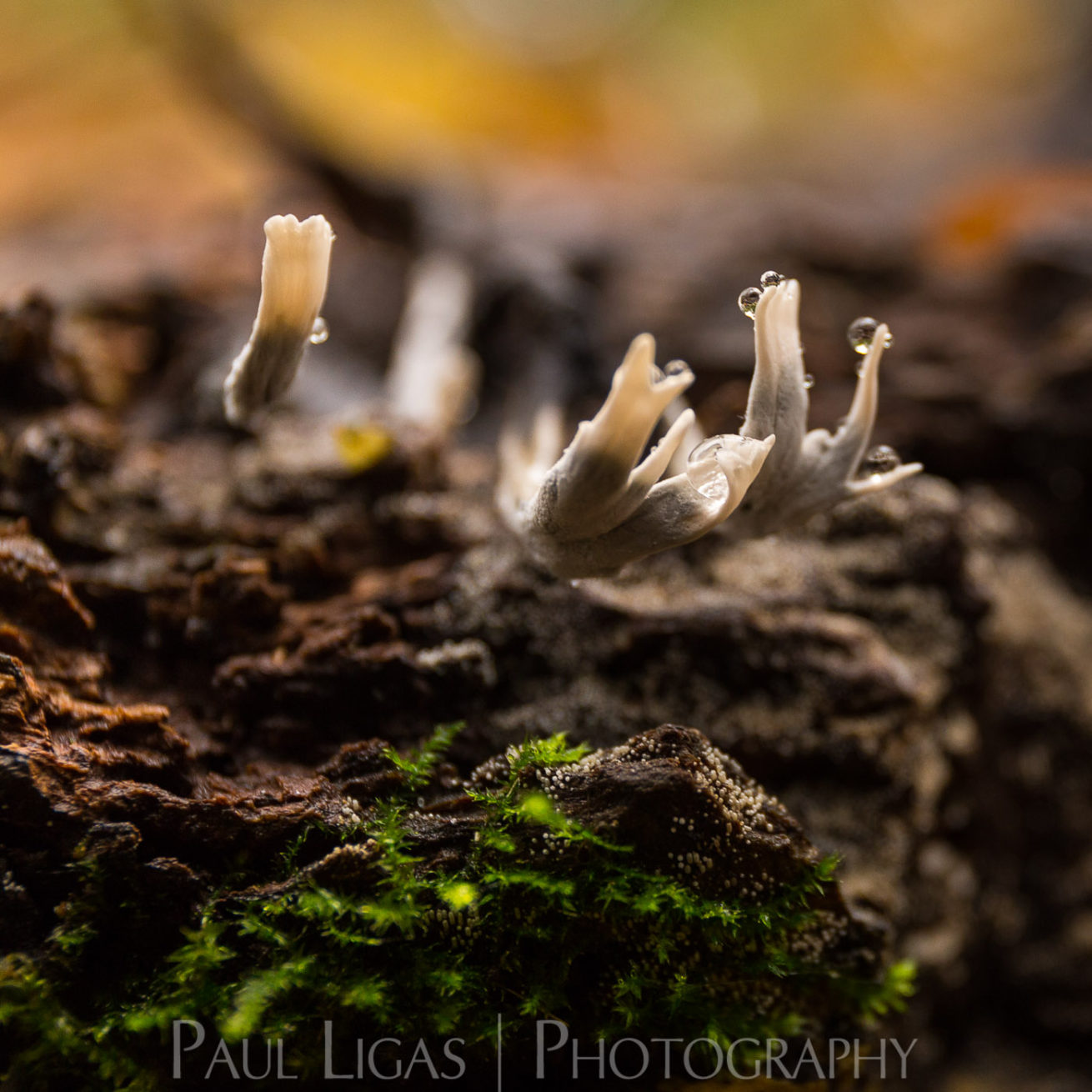 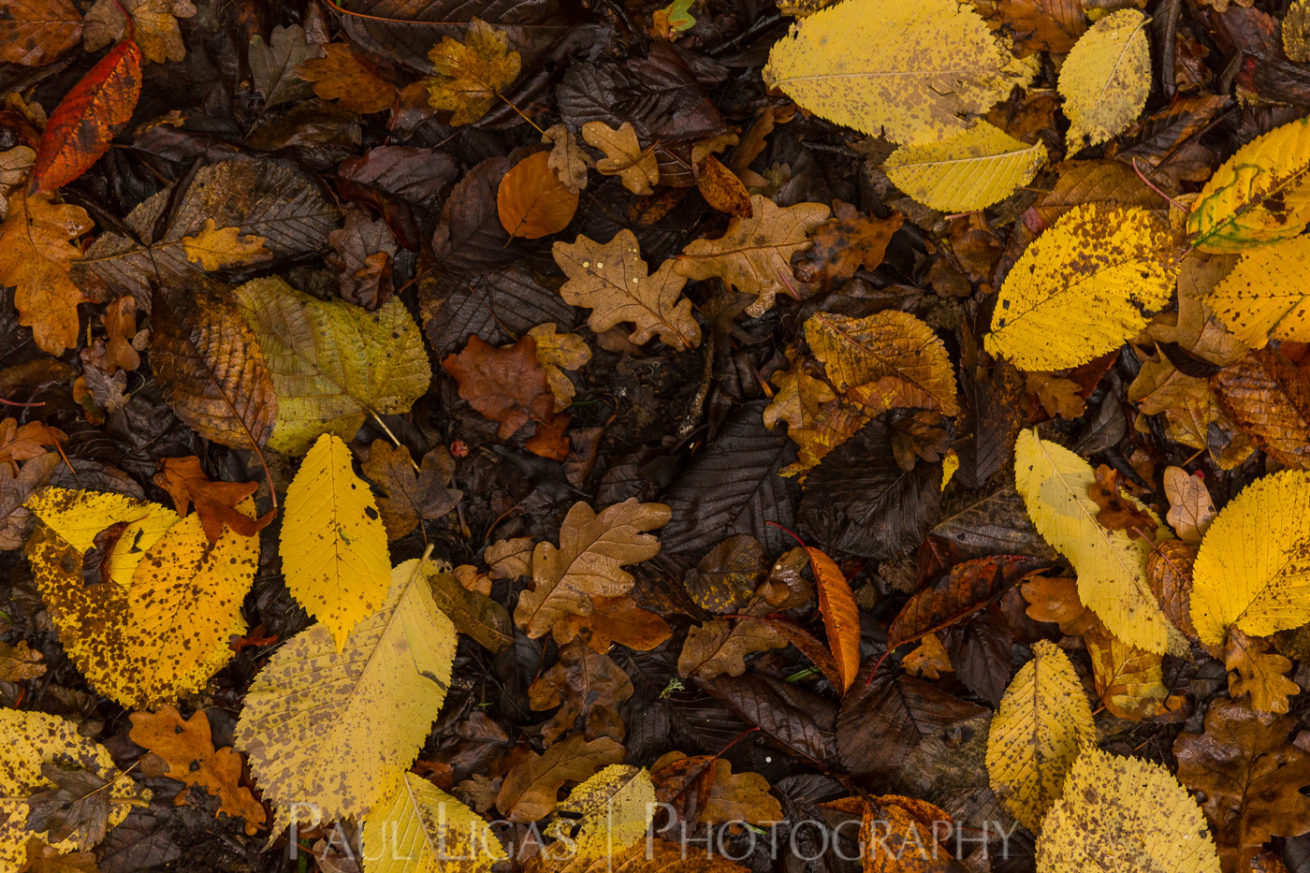 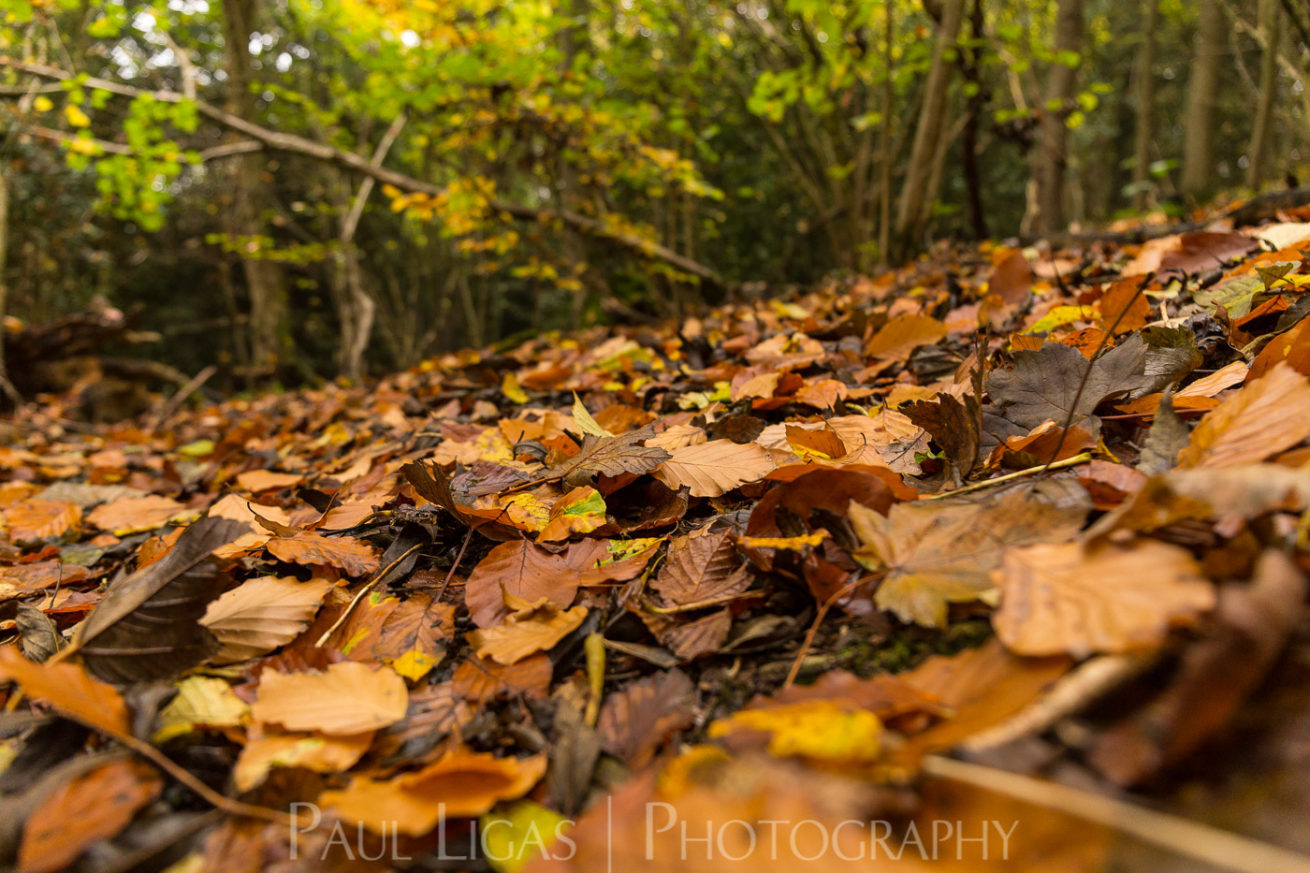 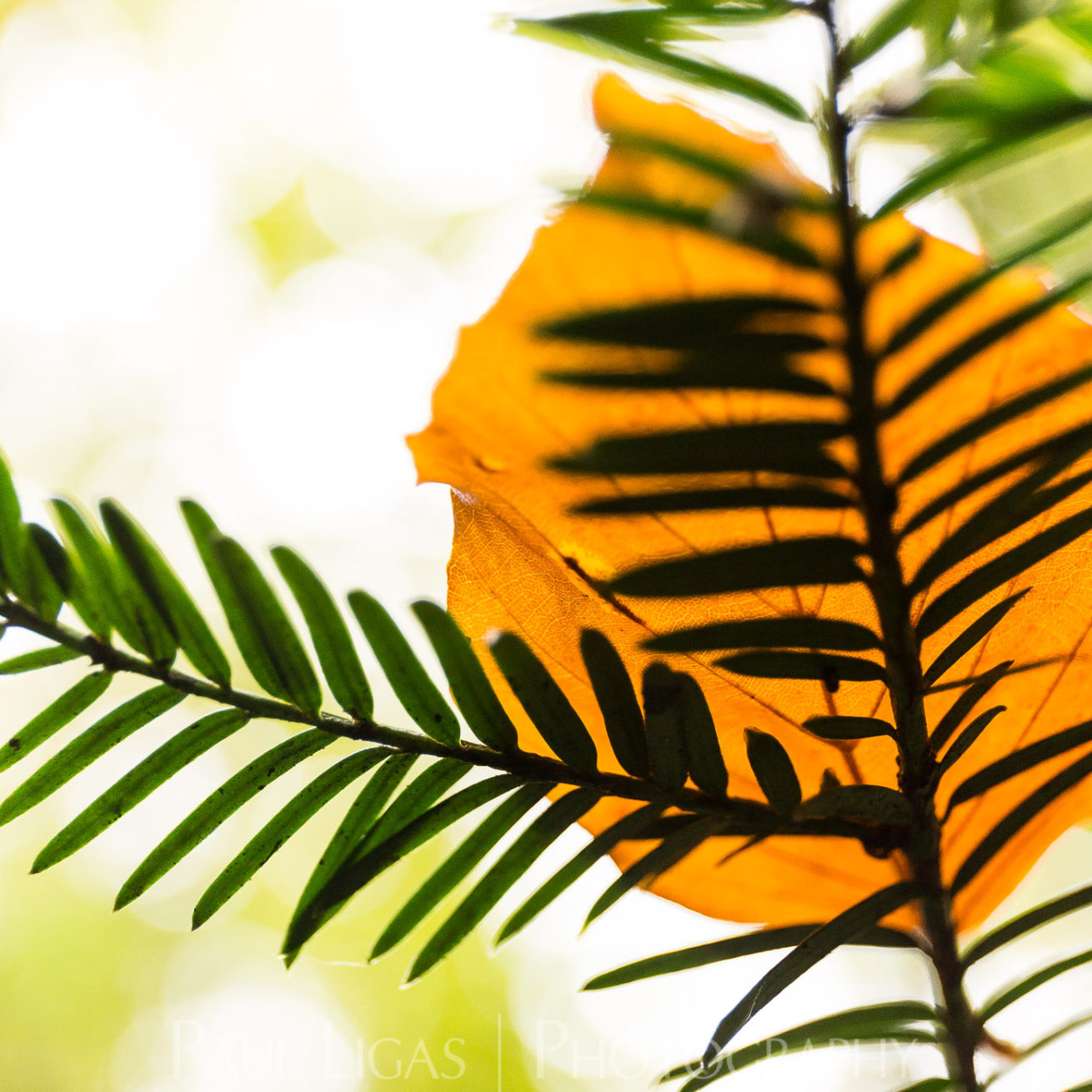 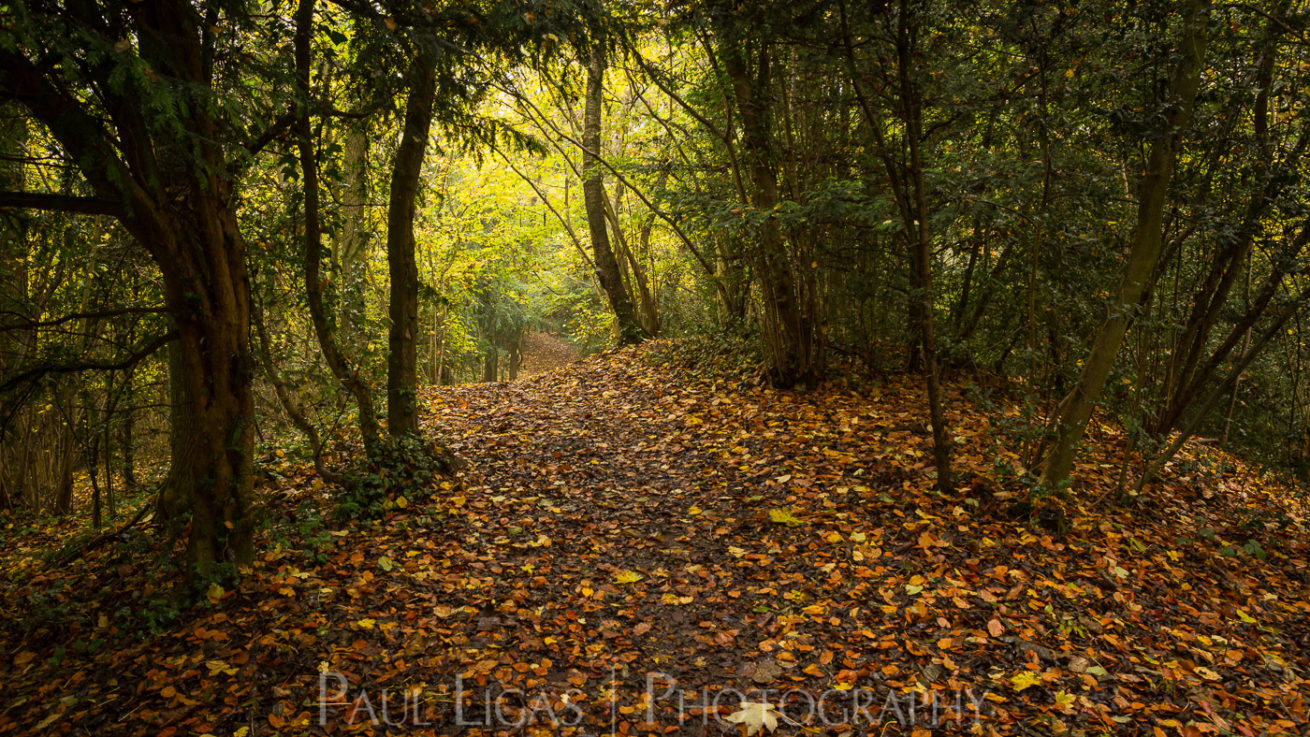 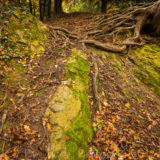 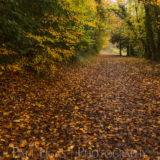 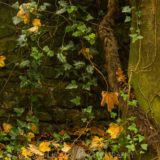 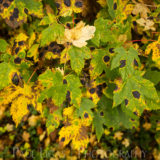 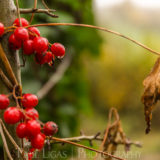 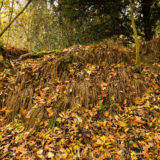 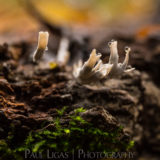 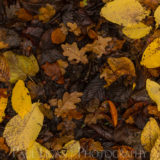 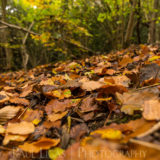 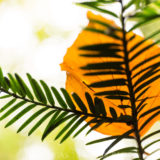 Outside of our gardens, where exotic or imported trees and bushes thrive and blaze with reds, purples and oranges, the leaves are falling and the woods are carpeted in yellow and brown – the colours of the English autumn.

As the days have closed in I’ve been reminded it was time to return to Dog Hill Wood in Ledbury with my camera to continue recording the woods through the seasons. When I set out this morning, Marcle Ridge to the west was invisible through the mist that has blanketed much of England for the past few days. When I arrived in the woods the leaves and needles were damp and dripping, and the carpet of fallen leaves glistened in the still humid air.

The magnificent yew trees on the way to Green Lane still fascinate me, but in autumn their strong and sinuous roots gripping the rocks are contrasted by the delicate and ephemeral summer leaves that now coat the ground around them. Around on Green Lane, not so much green remains, with the tunnel formed by the path now opening up to the sky and the rich smell of damp leaves filling the air.

Along Green Lane there is a small section of rock wall that I’ve no doubt walked past on many occasions, but today I stopped, wondering where the rest of the wall has gone, but also finding myself fascinated by the textures in just one small corner of the wall. Ivy vines and holly branches trail over the top, but a large trunk of ivy, thick with its aerial rootlets, presents a pleasing contrast to the smooth holly trunk growing beside it, with yellow sycamore leaves caught in the branches and vines before they hit the ground.

Further along Green Lane, a small sycamore, its leaves still holding on, is covered in black tar spot patches – a fungal growth that does no real harm to the trees, but which is most noticeable late in the season, with cooler, damp weather allowing its spots to become more visible at the same time as the leaves change colour.

Water drips from leaves and berries alike, though it hasn’t rained for days. A cluster of bright red berries stands out against the dark green of ivy behind them – poisonous black bryony, its withering leaves still clinging to the winding vines.

Further on Green Lane, grass flows down a slope like a waterfall, with foam made from fallen leaves.

As I rounded the corner onto the path that runs parallel to Cut Throat Lane I noticed a fleck of white on the edge of the path out of the corner of my eye. Stopping, and letting a woman walking her dog go past, I crouched to examine a rotting piece of wood, with white fungal growths competing with the moss to return the wood to the soil.

Around me leaves coated the forest floor in layers, with the oldest already almost black under brighter layers above, but still with more to fall before winter sets in. The wind hasn’t whispered while I’ve been out, and fallen leaves perch on branches or needles around me, awaiting a breath of air to finish their journey.

The woods were quiet today, the mist in the surrounding fields and hills keeping them a bit more isolated, and it’s already getting darker, though it’s barely mid day. Winter will be my next stop in Dog Hill Wood. Until then, enjoy my previous articles on Dog Hill Wood through the seasons: